The Church’s Ministry of Healing –The Mount, Belfast

The Church of Ireland introduced two healing Ministries in 2009, one based in Dublin, the other in Belfast.  They are autonomous charities, and have a formal agreement that two members of each Board attend the other’s Board meetings to provide harmonisation.  There is no hierarchical structure, geographical, diocesan or indeed religious partition in the Church’s Ministry of Healing.  The Church’s Ministry of Healing in Belfast is open to those of any faith and none, and is not geographically restricted.  The Church’s Ministry of Healing in Belfast is free at the point of need where necessary, and therefore depends on financial support from the public, and we welcome contributions to our work.
The Church’s Ministry of Healing–The Mount in Belfast is a cross-community, inter-denominational outreach of the Church of Ireland to those of any faith or none, who are in difficulty and who need help.  We seek to promote, and give everyone, irrespective of their cultural or religious affiliation, access to God’s healing power through Christian healing, secular counselling and personal ministry, delivered in a non-judgemental, accepting, professional, ethical and theologically sound manner.

The Ministry is grounded in the Christian values of hospitality, belonging and wholeness which fosters opportunities for healing, growth and reconciliation at an individual and communal level so that all can reach their fullest potential.  This is achieved through a wide range of professional and strictly confidential counselling and support services, which are provided in a private, safe, and non-judgemental environment.

Our mission is to bring peace and harmony in an increasingly troubled world, and this is delivered in a secure, ethical and theologically sound manner, so that all may receive God’s grace.  The ministry is complemented by a professionally supervised, secular, non-judgemental, qualified counselling service.

Our aim is to journey with individuals who struggle with daily life; especially those in physical pain, emotional turmoil and spiritual discomfort to bring them hope and courage, peace of mind and tranquillity of spirit.

The help for you which we offer is comprehensive, integrated and discrete to best meet individual needs of those in difficulty, and the needs of parishes and groups who seek to be informed and practice effective prayer, healing and reconciliation. Each helping branch is boundaried and distinctive with professional supervision and audit, yet flexible to encourage confidential progression between the ministries to lead to self-esteem, a vibrant faith, social rehabilitation and church integration.

While each area of help is defined, the Director of Ministry would encourage you to discuss your individual needs with her, to determine what category of help might be best suited to you or your organisation. 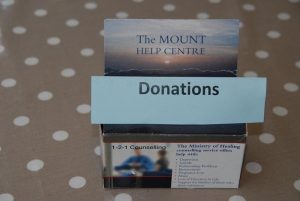 Help for us ………to deliver this Ministry at the point of need…….. 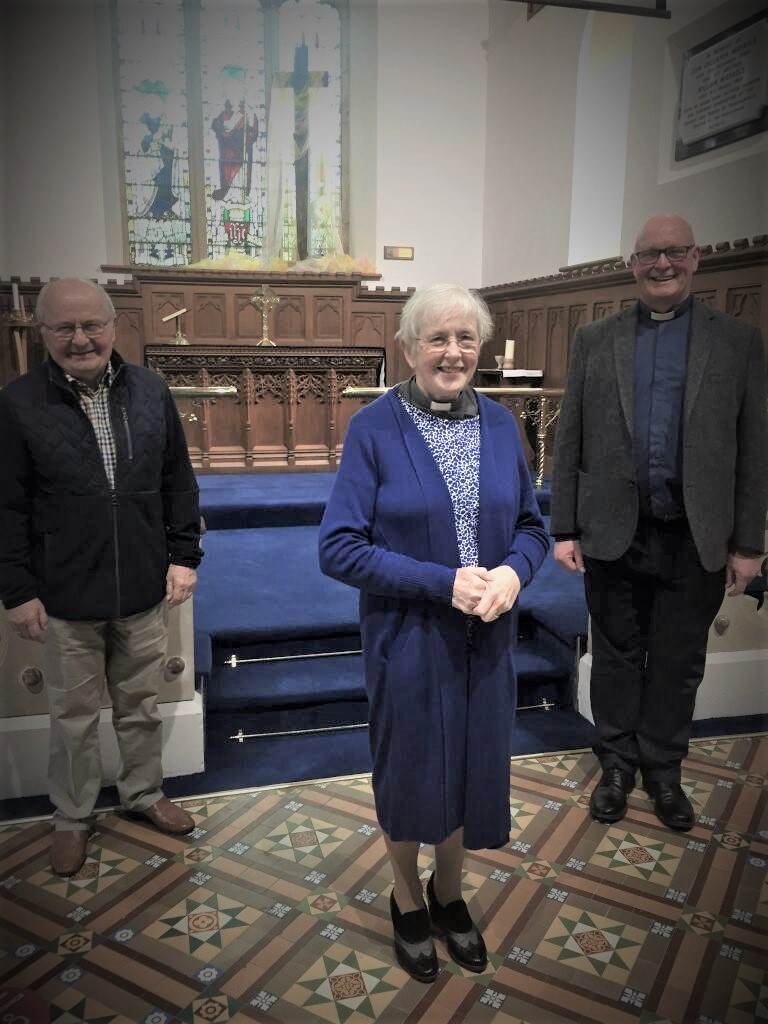 Healing Services out and about…..

At the invitation of Canon Paul Hoey, I travelled to Eglinton, Co Londonderry,  to take part in a Healing Service on Sunday 17 October, 2021, at St Canice’s Parish Church, Eglinton, accompanied by Billy McAlpine from St Donard’s Parish Belfast.  It was raining as I left Downpatrick to collect Billy in Belfast, but as we travelled the weather improved.  The Glenshane Pass welcomed us with splashes of sunshine illuminating the hills, encouraging us past extensive roadworks, but that was nothing to the warm welcome we received at St Canice’s.  It was so lovely to be back ‘on the road’ again travelling throughout the province to tell of the work of CMH and join in healing prayer with a congregation.  Billy had come with me to tell some of his journey through bereavement accompanied by the Christian Family.  After praying for the Bishop and the Rector, but remaining socially distanced, the congregation came forward to form a large circle round the chancel.  As we approached each person  they said their name and were prayed for individually by name and received a blessing.  So many people wanted to come forward that we had to repeat the process!

What a wonderful way to mark St Luke’s-tide!

Visit of the Primate and Archbishop of Armagh 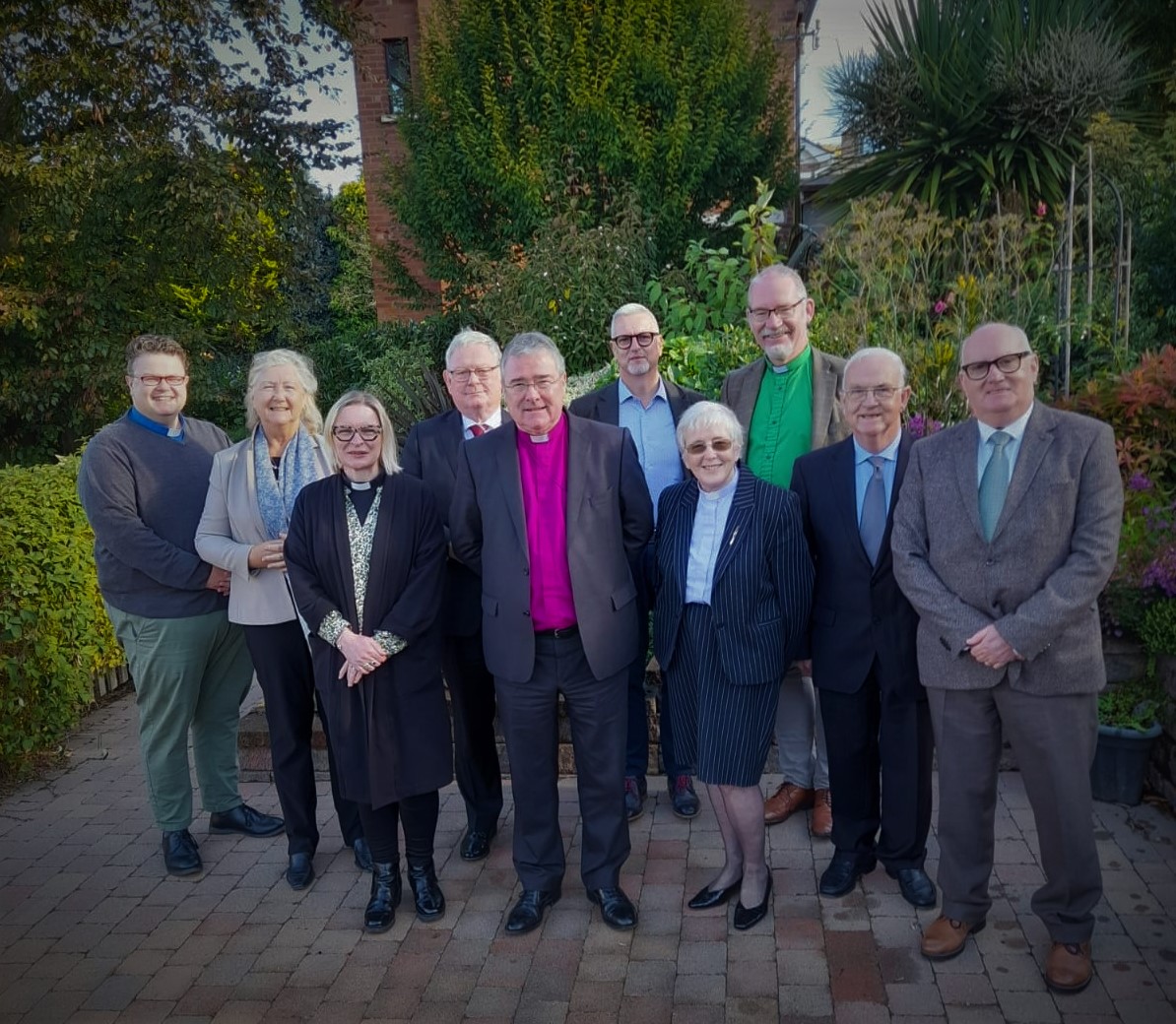 On Monday 25th October the Church’s Ministry of Healing-The Mount was blessed in a visit by Dr John McDowell, Archbishop of Armagh and Primate of All Ireland. His Grace visited at the invitation of the CMH Board who were keen to share with him the progress we are making with regard to our future and to gain from him the blessing of his office as we proceed. The event was fruitful in both respects.
Archbishop John spent an hour and a half with us. He gave us his most hearty encouragement as we go forward both in our future and the part that we might play in the life of our country which is so much in need of healing in this pandemic and beyond.
The Archbishop was especially exercised upon how greatly our young people have suffered over the recent past. He expressed his concern for their future in face of so many lost opportunities in their young life experiences that cannot be restored.
At the end of his time with us the Archbishop gave permission to make the visit central to our prayers this week and we in turn extended the promise that we would include him personally within those.
We thank God for this encouragement as it stimulates us to greater urgency in the affairs of his kingdom and the ministry of Christ’s mercies for healing in our land and amongst its people. We pray for our processes as we look to organise to play our part in those ministries of grace; and we pray for His Grace, Archbishop John as he strives to fulfil his office. Poignantly he reminded us that he was elected to the Primacy on 11 March 2020 to encounter within a week or so those ravages of lockdown which have affected our people so gravely and constricted his own opportunities for personal engagement which his duties would normally require.
We follow closely today the Apostle Paul’s instruction at 1 Timothy 2:1-4:
“First of all then I urge, that supplications, prayers, intercessions, and thanksgivings be made for all people, for kings and all who are in high positions, that we may lead a peaceful and quiet life, godly and dignified in every way. This is good, and it is pleasing in the sight of God our Saviour who desires all people to be saved and to come to the knowledge of the truth.”
We have been truly blessed. 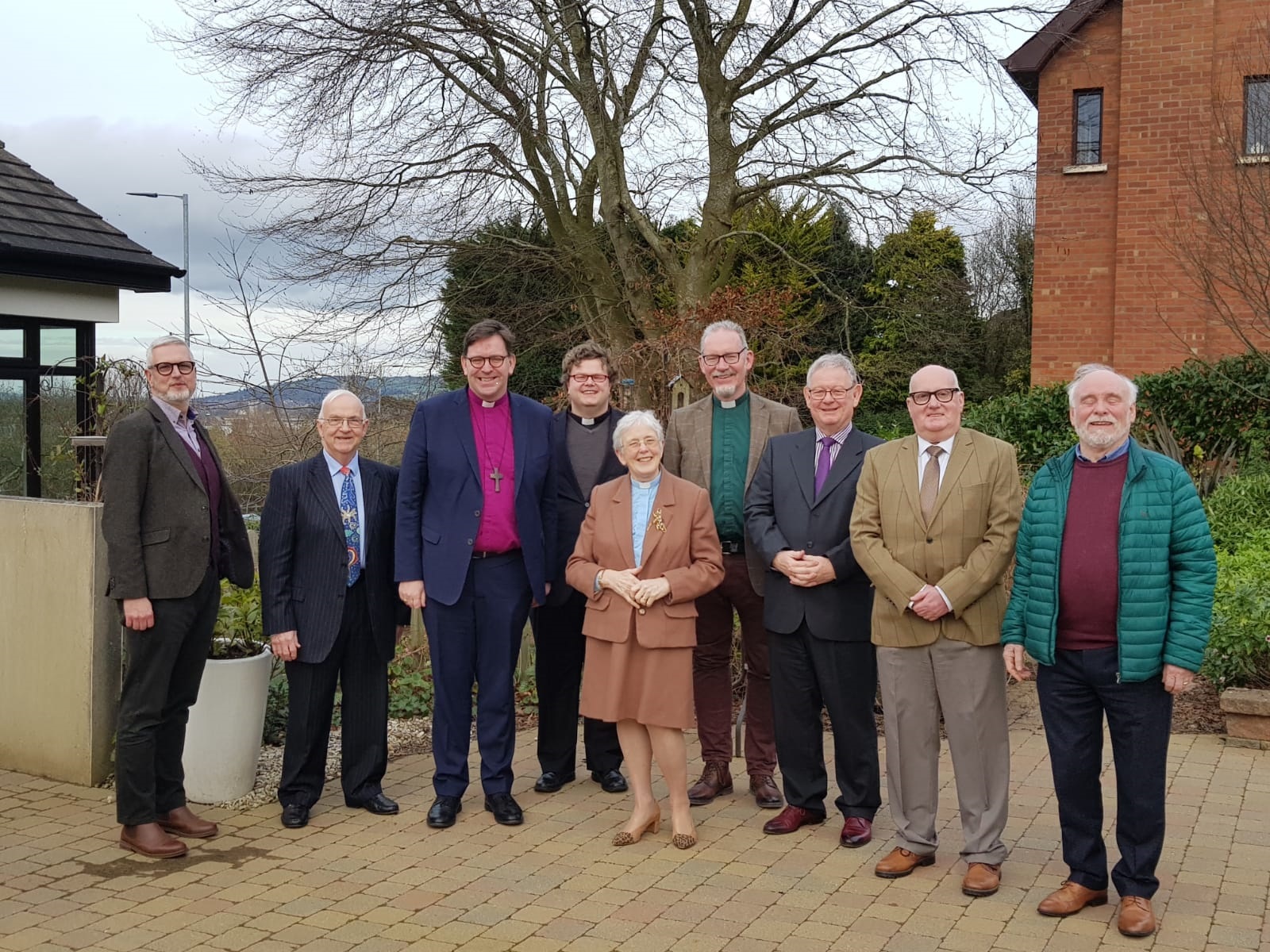 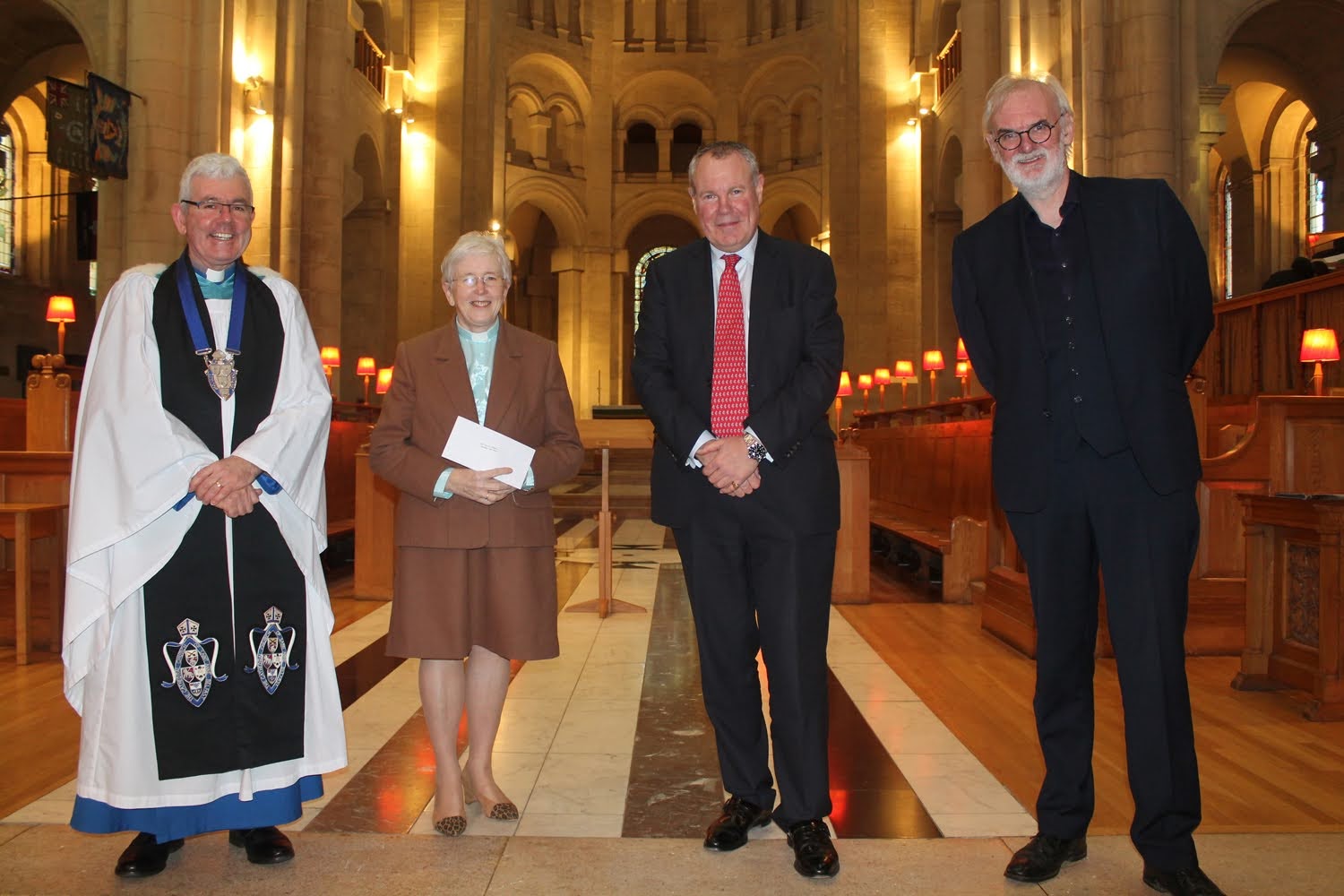 Pat receives a donation from the Black Santa Christmas Appeal, special guests were Conor Burns, Minister of State for Northern Ireland, comedian and actor Tim McGarry,  and the Dean.

Each Thursday the CMH Board prays between 7.00 and 8.00 am for the Ministry of Healing, and we invite you to join us…….

Church’s Ministry of Healing The Mount

The church in Jerusalem was disrupted by a crisis.  The religious authorities were no more comfortable with the apostles than they had been with Jesus himself and they tried to do away with them as they had the Lord himself.  Amidst disruption on the ground the Holy Spirit was moving in his people.  He set them on the move in turn.

Over the past six months our weekly prayers have centred around the themes: “Pilgrimage”, “Wilderness”, and “Call and Response”; we find each in Acts 8:26-40.  The passage has by tradition earned the title “Philip and the Ethiopian Eunuch”.  The encounter on the desert road between Jerusalem and Gaza is full of interest.  I can recall many sermons on the subject which ranged across the themes of: “International Evangelical Mission”, “Baptism”, and “The Importance of Scriptural Study”.  All those issues are present and each deserves attention but I am suggesting that they are subsidiary.

The Ethiopian enters the scene only some way into the action, and he departs without further trace before its end. The principal thrust of the text concerns the work and unction of the Holy Spirit.  The mission of the church is the supreme issue; encounters along the way, (however significant in their place), serve to inform our understanding of God’s plan.

An angel told Philip to move in the opposite direction to his current path.  He had been successful at Samaria which lies north of Jerusalem, but now he was to turn south towards Gaza.  This diversion took him into a desert place, “And the Spirit said to Philip, “Go over and join this chariot”” (v.29).  The details are well known, Philip witnesses about Jesus as he had been called to do and the man responds in the way that disciple making was meant to happen.  Each did as Jesus had said they should and joy was the result.

Philip was called to make a journey; he responded with just enough information to direct him into an otherwise uninviting place.  The kingdom of God was advanced and worship was offered to God.  The new convert carried fresh faith abroad to his African homeland; “But Philip found himself at Azotus, and as he passed through, he preached the gospel to all the towns until he came to Caesarea.” (v.40).

We might reflect upon Philip’s readiness to hear and obey the leading of the Holy Spirit as he left the site of recent success to go on an uncomfortable journey.  Only when he was in the desert did Philip discover why he had been sent there.  Wherever he found himself he continued the work of gospel witness which is the basis of the church’s commission at large.

As part of that witnessing body The Church’s Ministry of Healing The Mount is to hold its Annual General Meeting today  We pray for God’s blessing on this opportunity and for his guidance over that which should flow from it.

Holy Communion with Prayers for the Sick

Prayers for Israel & the Nations